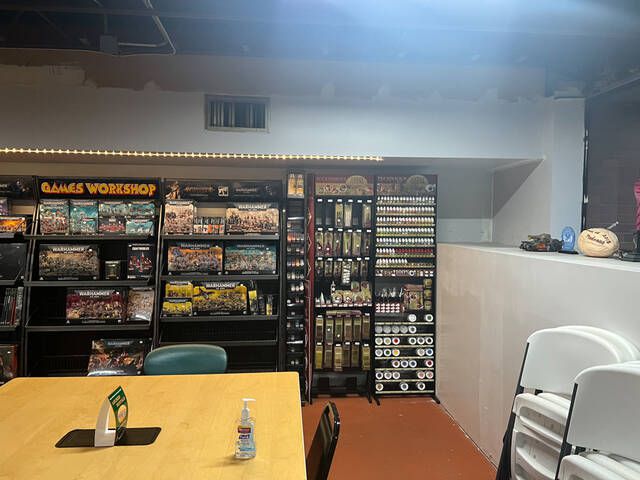 WILKES-BARRE — For Ryan Cerulli, owning a downtown business is a way to bring the community together.

Cerulli, 33, owns and operates Sword in the Stone Games, 117 S. Washington St. The business itself was built from a passion for gaming, for art, for adventure and for anything considered “epic”.

And that’s no exaggeration. You name it, Cerulli has it.

Originally born out of a collection of Magic: The Gathering cards, Sword in the Stone features other well-known collectible card games like Yu-Gi-Oh!, Pokemon, and Digimon, to name a few. On top of that, there are tabletop classics like Dungeons and Dragons, Cataan, Warhammer (in all of its iterations), miniatures and models imported from Japan, and many more offerings.

But again, the real focus is community.

“We do so many things here,” Cerulli said. “We have daily events and the only day we are closed is Wednesday. On weekdays, we open at 5 p.m. Monday night is board game night. From opening to closing, there are board games. Tuesdays are Pokemon and Yu-Gi-Oh! where people come to play for free. We also offer again the option for tournaments. As it is community, we let the community decide.

Explaining the rest of the calendar of events, he said Thursday is an “in-service” day, where patrons meet to play one of the many board games available for public use, or bring their own.

“Friday and Saturday is absolutely crazy with the amount of stuff we have,” Cerulli explained.

“You name it, it’s done on Saturdays,” Cerulli remarked.

Then, Sunday is “Dungeons & Dragons Day” where everyone is welcome, including beginners who are curious to learn the intricacies of the game.

Most events, if it’s a tournament with prizes, are chargeable, but board game nights are 100% free, including games, which are available for demo customers, also fully free.

The store also offers table reservations so people can host their own games or work in a game not offered by the store, even if you’d be hard-pressed to find one.

It has been a road for Cerulli. He opened the store with money he had saved for one purpose, however, as life progresses, plans change. He took those savings and invested in a Magic: The Gathering collection, which he was able to reinvest multiple times, making a profit. And although the store has changed its name and location, it has been established in Wilkes-Barre for about four years now.

Of course, just like the characters in those games, they’ve had to weather storms and challenges, persevering every step of the way.

The pandemic has had a “severe” impact on business, as Cerulli put it. “I was lucky to have a full-time job at the time, but it still put a strain on us because there was no income, just by continuing to put in money. money in the business. Our sales were, you know, less than 50% of what they should have been, but it was enough to keep overhead costs paid.

Sword in the Stone received financial assistance in the form of a grant, which covered a year’s lease.

Today, the store is still fighting valiantly to come back, and Cerulli is determined to engage the community and hopes to inspire the next generation of gamers and dungeon masters.

“I want to be able to make the next generation fall in love with the Magic card artwork and the Dungeon and Dragons book artwork and love it for it. Not the monetary value. I want to be able to get people to love their hobbies for their hobbies,” he remarked. And he thinks companies working together, instead of against each other, as well as with the community as a whole, are the key to a most successful rebound.