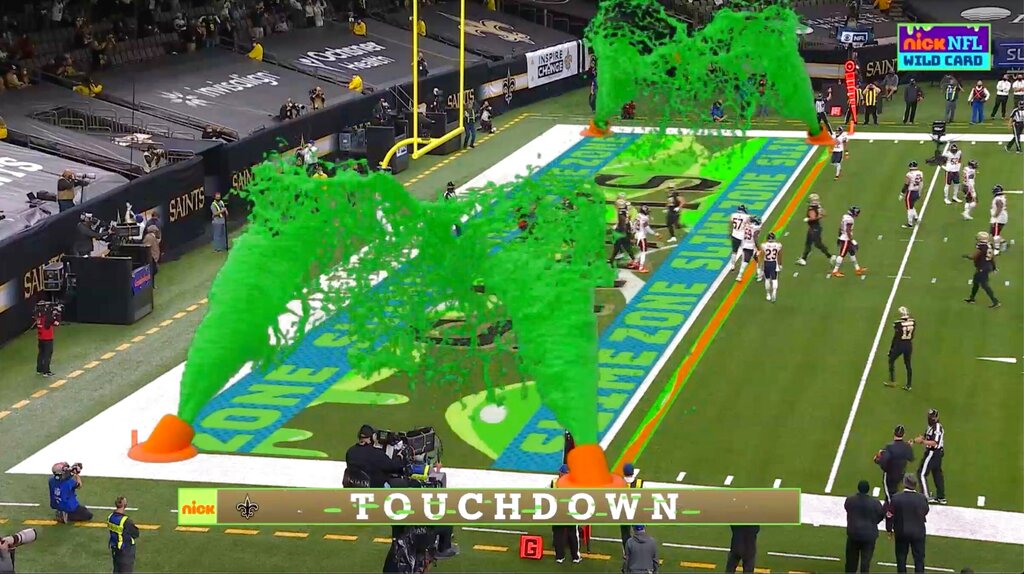 LOS ANGELES (AP) – Brian Robbins directed “Varsity Blues” and was the producer of “Coach Carter,” but the two could have been eclipsed last Sunday with Nickelodeon’s successful broadcast of an NFL playoff game for children .

Even days after last Sunday’s game, the president of Nickelodeon and everyone associated with the broadcast are still receiving high praise.

â€œIt felt good to get into the game on our ideas to make the day watchable for kids and families together. I felt good about the talent, â€said Robbins. â€œWhat surprised me was the enthusiasm from all over the world to know how great it was. I think it was a breath of fresh air at the right time.

The New Orleans Saints’ 21-9 win over the Chicago Bears was the weekend’s most-watched wild card game, averaging 30.65 million viewers. In an era when even debates about favorite foods spark debate, the 2 billion social media impressions were overwhelmingly positive. Nickelodeon was Twitter’s # 1 trending topic during the game, and #NickWildCard and Spongebob were in the top 10.

The Nickelodeon presentation didn’t just provide a model on making alternative shows. It is also likely to inaugurate more additional broadcasts for the same event.

CBS and Nickelodeon weren’t the only ones using multiple networks during Sunday’s playoff games. ESPN first rolled out its MegaCast processing for an NFL post-season game, and NBC used the Peacock streaming service which included a dedicated post-game show.

â€œI applaud everyone’s creativity,â€ said CBS Sports President Sean McManus. â€œWe are all trying to reach and expand our audience. You have to work hard to reach them and use so many platforms to achieve it. There is a lot of competition, whether in the news or in sports.

Tag Garson, senior vice president of properties at Wasserman, has long been a supporter of alternative shows dating back to his days at ESPN, as viewers, especially younger ones, continue to be more fragmented by the way they watch and consume various types of content. .

â€œThe NFL, because of its reach, allows for the different types of distribution that we saw on Sunday,â€ he said. â€œIn my opinion, I think you see the networks also looking to program the other channels with the content they own. If you don’t pay an additional rights fee to do it but give it a different look, it provides a wider reach while still delivering programming to the channels.

To prove Garson’s point of view, Nickelodeon averaged 2.06 million viewers during the game. It was the most-watched program on the network in almost four years and a 245% increase in viewership from what aired in this spot last year.

What also made Nickelodeon’s broadcast so successful was that it appealed to parents and kids alike. He introduced a younger age group to the basics of the game, but also focused on the action taking place on the pitch. Some alternative shows have failed because action on the ground has often been ignored.

McManus said an important point ahead of the game was to make sure coverage of the match remained the priority. Iain Armitage’s penalty explanations from CBS’s “Young Sheldon” and virtual mud cannon animations for touchdowns have been added to the game instead of removing it.

â€œThere is a certain integrity that we had to respect. We never wanted to cross the line, â€said McManus. â€œI got so many emails and texts that they loved the experience of watching with their kids. It was fun and informative. It was referring to other children’s shows, but is never got to the point of conforming to the demands. Hopefully this created some new fans and made the viewing experience something they could enjoy.

McManus and Robbins said nothing was to be ruled out regarding the next alternate presentation, but nothing was imminent. With ESPN having the rights to NBA, MLB, and NFL, there is a possibility of a kids’ TV show with Disney on the go. MegaCasts are often on all ESPN networks as well as on its app, but Sunday’s playoff game had an evening standby on Freeform.

With the CBS-Viacom merger, McManus highlighted the possibility of branching out into other networks. If it was with Nickelodeon again, he would have a willing partner with Robbins.

â€œA lot of people want to have conversations. I am a huge sports fan. I would do this all day, â€Robbins said.